This is really fitting since yesterday was Father's Day. My dad LOVES to BBQ, well actually Traeger..it's like a BBQ but it also allows you to smoke the food too. You can make ANYTHING on the Traeger. I had a friend make cookies! Of course she didn't smoke it lol.

He's always using a plate to put the chicken, salmon, or whatever he's cooking on. Usually it's chicken though, since that's his thing in the BBQ competition.

I saw this fun and easy project on Pinterest I'd been wanting to try. Can I say again how easy it was? Easy!

This is the project that inspired my craft:

Well I had to make it less girly, so I didn't do cursive. And I didn't write a story/poem/song. But that would be fun! Instead, I used grilling/cooking terms specific for my dad. 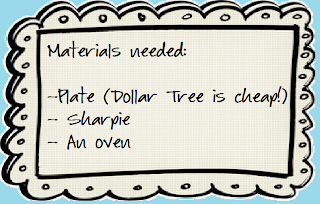 Frame from The 3 AM Teacher

Simple materials right? I already had a sharpie. And an oven...imagine that lol :) So I just bought a cheapo $1 plate. 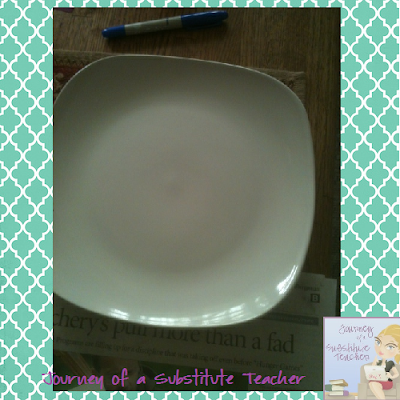 Then I thought about the words I wanted to write and where. I decided to just go around the border. 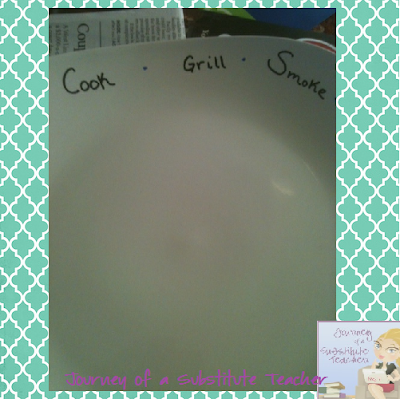 Then I also had a blue sharpie and used it to make those blue accent dots. Hmm maybe this is a good excuse to go buy a rainbow sharpie pack. Anyway, pop in the oven at 150 degrees for 30 minutes. I've also seen info for 30 minutes at 350. 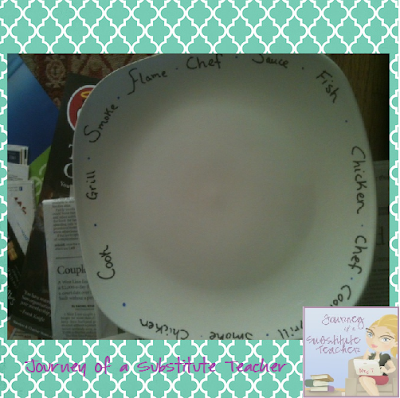 Simple project, fun, and cheap! I could see doing one for birthdays, Christmas, any potluck or gathering really. Christmas I could put Christmas song titles, gatherings I could put 'friends', 'food', 'talk'... oh the possibilities are endless. Good thing the plates are only $1 :)

I also linked this up to Tara at 4th Grade Frolics Monday Made It Linky.

Pin It
Posted by Journey of a Substitute Teacher (Ms. T) at 9:00 AM

Thanks for your 'pinteresting' comments :)